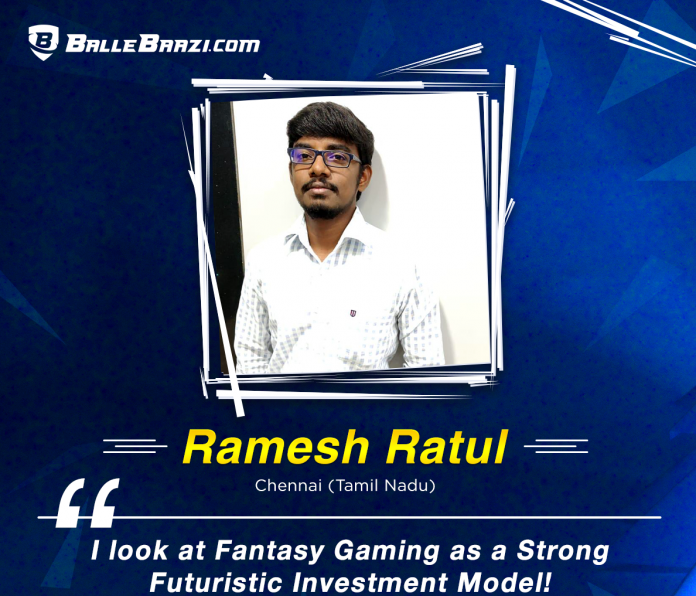 Gone are the days when you could only have players on the field while the others were busy either simply watching the game on TV or listening to the radio commentary. Fantasy gaming has emerged as a thriving platform for the sports-crazy audience where they get a chance to participate in live games from the comfort of their homes through their smartphone. BalleBaazi; being one of the leading fantasy cricket apps has been successful in giving regular cricket fans a chance to cash in on their knowledge of the sport through its one of a kind leagues.

This week on BalleBaazi, we bring you a success story from the state of Tamil Nadu where a regular 27-year-old Ramesh Ratul working in the BPO sector, competed with 7,851 teams and clinched the Mega League Title of the Big Bash Final between Melbourne Renegades & the Melbourne Stars, thereby winning a whopping  ₹25,000 cash prize!

Let’s see what Ramesh had to say after we got into a candid chat with him.

Q: How does it feel to win the Mega League of the Finale of such a huge tournament as the Big Bash?

A: Indeed, it’s a very special experience and I would like to thank BalleBaazi for the given opportunity on which I could capitalize so well.

A: Well, like you mentioned as a new user when I came up I just wanted to try out the app but after getting lucky in 2 or 3 matches I thought it was really fun because of the lesser competition and before I knew it, the Big Bash Finale happened! It was my first Big win!

Q: What was going through your mind when you chose Daniel Christian as Captain who eventually earned you 102 fantasy points?

A: The fact that he’s an all-rounder was enough for me to choose him as Captain because it was a big occasion of the Final so it had to be an all-rounder who could change the game with both the bat & the ball, which luckily for me, he did.

Q: From where did you get to know about BalleBaazi.com?

A; I was browsing through Google until I saw this google ad on the side of ‘BalleBaazi’. The logo and the brand name looked quite intriguing so I went ahead & installed it.

Q: Which league is your favorite- Classic, Batting or Bowling?

A: I take up fantasy as something where I am investing my money so I’m always looking for bigger and better returns, therefore, I always prefer Classic League over any other leagues. Also, I play almost regularly so I think of it as a major investment which has the potential of giving me good royalty returns. Now that I am winning so I’m looking forward to playing more regular fantasy cricket with BalleBaazi.

Q: What matters more in fantasy cricket: luck or skill/knowledge?

A: Well, obviously if luck is on your side you can choose any 11 players that can win it for you, but to be honest it takes knowledge and skill to judge what playing 11 will be present on the field according to the conditions and the state of a particular series, so knowledge would any day overpower luck since it’s the backbone of how you choose your team.

Q: Since when have you been following cricket & how new are you to the fantasy gaming arena?

A: Well, since I was a child, I guess I have been a huge fan of cricket but fantasy is pretty new to me it’s only been 2 or 3 months when I have started participating in the games actively.

Q: What are your plans for IPL & the upcoming Cricket World Cup?

A: I am looking forward to playing more & more of fantasy cricket with the IPL & World Cup coming up. Ready to spend as much as I can on it since it’s going to get better this time & hopefully I can cash in on some more mega leagues for the big matches! Well, we only wish green lights to Ramesh as he cruises high on the recent win & gears up for 2 major upcoming Cricket Festivals- the IPL & the World Cup. Stay tuned to BalleBaazi as we’re all set to bring up lots of surprising & jaw-dropping offers for you to amplify your excitement to a whole new level. Keep Playing & keep winning, who knows…. ‘You’ could be our next Success Story!