﻿﻿ Cricket Records That Will Never Be Broken - BalleBaazi Blog
Menu

The Indian T20 Premier League fever is on and cricket is the talk of the town. From your friendly neighbourhood Tapri to bustling socials on Twitter, everyone seems to be sharing and shedding their Gyan of cricket.

But cricket has been the prime highlight since forever and many cricketers have become hot-topic by performing some extraordinary feats and setting some “hard-to-break” records.

Let’s look at 10 astounding Cricket records which are held by some distinguished sportsmen that will never be broken:

The story about Sir Don Bradman‘s last innings is the stuff of cricketing legend. After a prolific career, the Australian legend needed to score just four runs to finish with a sensational Test average of over 100, topping our list of Cricket Records without question.

He was bowled for a duck and finished on 99.94, which despite being a minor numerical disappointment, is by far the highest that has ever been achieved and sets first-class cricket records.

Bradman’s talent has simply made him a statistical anomaly that will never be topped by anyone who plays a significant quantity of games.

The Yorkshireman, who famously started at the bottom of the England batting line-up and finished as an opener, Wilfred Rhodes is the oldest man, at the ripe old age of 52 years and 165 days, to ever play Test cricket. In the modern era, with players often finished by their mid-thirties, this first-class cricket record won’t be broken.

Wilfred Rhodes also has the cricket record for the greatest number of first-class wickets. While Muralitharan took the most wickets in international cricket, the English player collected 4204 wickets making a first-class cricket record that’s yet to be broken.

Indian cricketer Rohit Sharma gets his name in the international cricket records by making three double centuries in ODIs – 2010, 2016 and 2019. As of 2022, This cricket record has neither been repeated yet nor broken, and it is believed to be something that can hardly happen again.

The world is divided over the opinion of playing formats. Some believe that the test matches are the best format for the game to have happened others love the fast-paced formats such as ODI’s and T20’s. Today, most people get excited about leagues such as the IPL that offer the short format but enthusiasts still regard Test cricket as the true challenge of the game.

And when test matches are talked about, it is tough to forget Master Blaster Sachin Tendulkar’s Cricket record as he played 200 test matches in his 24-year career. It is only after him that Ricky Ponting’s 168 matches enter the list.

In a highly competitive format such as T20, a dot ball is considered difficult to obtain, playing a maiden super gets your name registered in the Cricket Records. In the 2014 edition of the Caribbean Premier League, Red Steel and Guyana Amazon Warriors both finished at 118/8 and 118/9 respectively in 20 overs and a super over was arranged to decide on the winner of the match.

West Indies spinner Sunil Narine became the first bowler to bowl a maiden in a super over. As of today, this feat has not been repeated and is unlikely to repeat in the future. Talk about stuff of legends.

Another cricket record that is highly unlikely to repeat goes to Virat Kohli when he took Kevin Pietersen’s wicket in a T20I by getting him stumped off a wide ball. Kohli holds this unique international cricket record of getting his first wicket without bowling a legitimate ball.

Technically, there is no age limit on retirement for cricketers, it all depends on their fitness, form and interest in the game. Many do retire early and many unexpectedly play till their 40’s and create many cricket records such as Sachin (40), Misbah (43) and Hafeez. Today in cricket, anything between 37 and 40 years is the ideal age for retirement.

But back in the old days, such was not the case. In 1899, Dr William Gilbert Grace handed over the captaincy to Archie MacLaren in his last test match against Australia. Grace was 50 years old and remains the only cricketer who has served as a captain at that age earning this first-class cricket record!

Let’s set the record straight with all the mind-boggling facts and golden figures. BalleBaazi offers you a chance to set your record on its stellar app. Start your research, get the numbers right, draft a dream team and watch the numbers rise.

What are you waiting for? Download the app today! 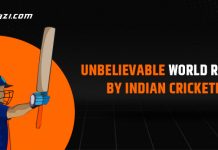 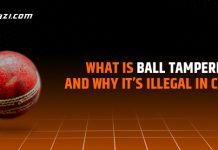 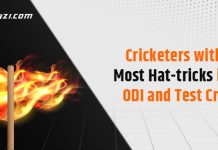