﻿﻿ How a Controversial Captain Paved The Way for a Historic Win! - BalleBaazi Blog
Menu

It’s that time of the year for every Indian Cricket Fan around the world to get their bean bags, chips & drinks ready as the most celebrated T20 cricket league gears up to entertain the cricket crazy fanbase around the world! As the complete entertainment package of explosive batting, economical bowling (which is going to be rare, I promise you!), controversies, memes, parties gets ready to pull its curtains up we bring you a flashback of the first IPL season winner: The Shilpa Shetty- Raj Kundra owned Rajasthan Royals!

1. Anup Revandkar
2. Jaydev Shah
3. Graeme Smith
4. Younis Khan
5. Shane Warne (Captain)
6. Morne Morkel
7. Munaf Patel
8. Sohail Tanvir
9. Aditya Angle
10. Pankaj Singh
11. Siddharth Trivedi
12. Swapnil Asnodkar
13. Mohammad Kaif
14. Darren Lehmann
15. Yusuf Pathan
16. Shane Watson
17. Ravindra Jadeja
18. Taruwar Kohli
19. Parag More
20. Niraj Patel
21. Dinesh Salunkhe
22. Kamran Akmal
In what was being anticipated as the most underdog teams of all, with a bench strength that looked like the above 22, no one could have imagined that this Shane Warne-11 had it in them to pull off such a huge upset in the opening season! Credits:Rediff
It was the season when a controversially-clouded head captained a team of amateurs to a season win! Rajasthan Royals did not have the best of the starts in the season after they lost the opening few vital matches. Shane Warne gathered the team well again & rebuilt a foundation that was lacking an expert’s touch. They knew they were the weakest on paper but they always had a beginner’s luck advantage. Warne was smart enough to use the resources he had in Sohail Tanwar, Ravindra Jadeja, Shane Watson & Yusuf Pathan who never missed out on any given opportunities! 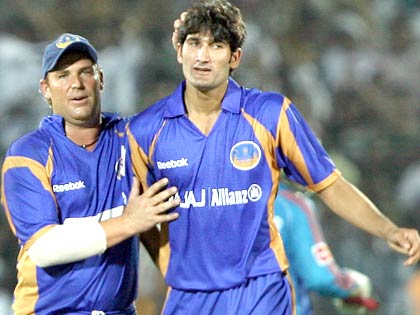 Credits: Sportskeeda
Shane Warne led from the front in a match against the Deccan Chargers where the team needed 10 off 3 balls and he himself smashed his Australian counterpart Andrew Symonds out off the park on the next 2 deliveries. 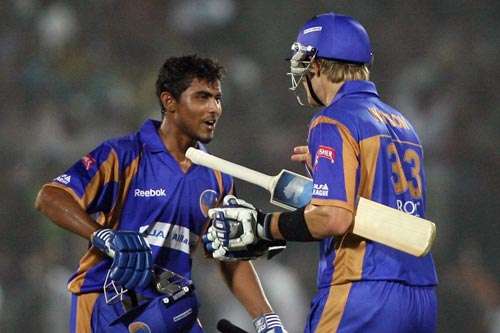 If it wasn’t for Shane Warne, we might have never been exposed to the talent of one of the best all-rounders in recent times- Sir Ravindra Jadeja; who was a novice back then! Under his guidance, he came up with some brilliant performances in the tournament.
On June 1, 2008 came the night of the final when the Royals went head on against the Super Kings led by our Captain Cool- Mahendra Singh Dhoni! With Raina hitting a blistering 43 powered by a quick knock of 29*(17) by the Captain himself CSK posted a total of 163 in their quota of 20 overs. 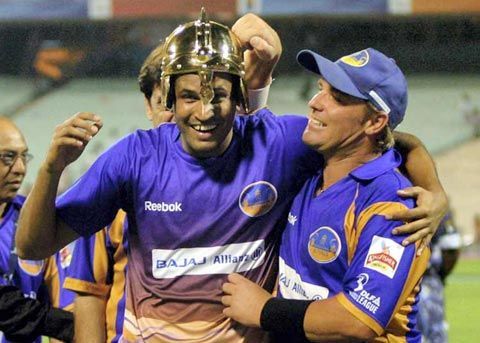 When the Royals came out to bat they sought the possibility of emerging as the winning minnows of the competition. Yusuf Pathan powered his team with one of the most explosive batting performances ever in his 56(39) that comprised off 4 sixes. After the last ball thriller with Sohail Tanvir hitting the winning runs, Rajasthan Royals not only created history for the very first time but also left an example of servant leadership at its absolute best!
Man of the Match(Final): Yusuf Pathan
Man of the Series: Shane Watson
We wish the best of luck to Rajasthan Royals as they adorn a new avatar in the upcoming IPL 2019 with Ajinkya Rahane leading the team! May the best team win.
Loved the Blog? Let us know in the comments below. Also, don’t forget to Download the BalleBaazi App now for the Most Amazing Fantasy Cricket Experience. Lots of Winnings & Offers to Cash In.
Download link: https://www.ballebaazi.com/getapplink/
WIN upto 1 LAKH today! Click here to join leagues!