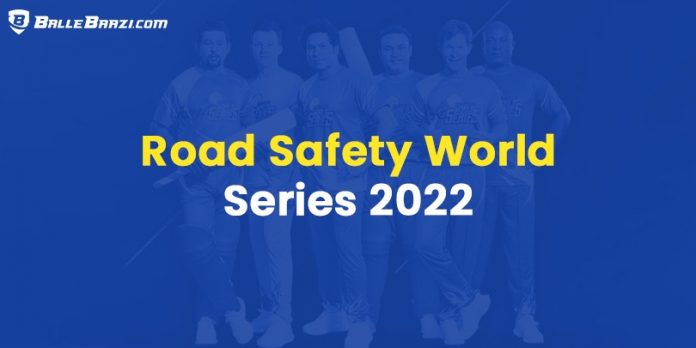 Cricket has been transfused into multiple formats across various topographies to amplify and enhance the art of this sport and spread awareness for a good cause. To put forward this sense of receptivity among the masses, the Road Safety World Series 2022 was brought into the picture with an immediate effect.

The Road Safety World Series 2022, also known as RSWS is a T20 international series featuring the legends of cricket from across the globe. The league is conducted with the sole aim to disseminate awareness on road safety and its associated guidelines.

As per the announced Road Safety World Series 2022 Schedule, the second season will commence from 5th February, 2022 to 19th March, 2022 in India, while in the United Arab Emirates, it will start from 1st March, 2022 and end in 19th March 2022. The day-wise Road Safety World Series 2022 Schedule, venues and timings are yet to be announced as of now.

The mega sports event for a noble cause is being carried forward by MSPL & ANZA Investment Group. As claimed by an Emirates Cricket Council, it has issued a document of NOC to the ANZA Investments Group (a venture owned by the Highness Sheikh Hamdan Bin Mohammed Alnahyan) for the uninterrupted functioning of the sports event.

Australia Legends is a prominent team of the Road Safety World Series 2022 which will rule out the scheduled matches for the league. The team stood seventh in the first T20 edition that was initiated in the year 2020.

The first season of the RSWS league was scheduled from 7th March 2020 to 11th March 2020 and 5th March 2021 to 21st March, 2021. The round robin and knock-out tournament witnessed India Legends as the winner of the first ever title of the RSWS. Sri Lanka Legends came second and ended up being the runners-up squad for the initial edition.

Out of the 19 matches amongst 7 participating teams, the following stats could be estimated:

These matches were played in four distinguished stadiums, located in India. The venues included:

The starting dates for the final match incorporated in India and UAE has been finalized by the governing council. However, the consolidated fixtures, venues and squad have not been officially declared.

The audience is anticipated to be wooed by the presence of 106+ cricket prodigies (retired) representing different countries to impart knowledge about road safety through their fair play manifestation and compelling performances.

India was crowned as the inaugural winner of the T20 international series wherein Sachin Tendulkar and Brian Lara were the highlights of the league. The magic of the legends such as Jonty Rhodes, Carl Hooper, Virender Sehwag, T Dilshan, Bret Lee and Yuvraj Singh was predominantly portrayed on the field.

As such, the forthcoming Road Safety World Series 2022 is undoubtedly going to be an ecstatic juncture for every cricket fanatic.

The Road Safety World Series 2022 will be the second mega season which will be adhering to the T20 cricket format. This bewitching edition with certainty, will bring in charm and glory by ushering the spark of cricket legends to ignite minds on road safety and vigilance.

If you too are a cricket enthusiast, then this edition is not meant to be missed! Starting from live scores to compiled details of participating squads, get your hands on an all-in-one platform that brings you updates on sports-related professional series across the world. Additionally, through this platform, you can also check Indian legend and other team schedules and player particulars with all veracity and reliability.

By accessing the sports platform, you can keep a frequent track of the Road Safety World Series 2022 Schedule, earmarked venue, teams and fixtures. However, if you still miss the live updates you can seek the blogs, available on the website for a week-in review.

We have developed a user-friendly mobile app that maintains your urge to own a team and play professional sports to gain cash prizes in no time. BalleBaazi is the app, suitable for iOS and Android users which etches a high degree of programmed perfection.

Our application confers a three-dimensional view of fantasy games to ensure a real-time experience for you. You can opt from the slot of fantasy cricket, football, basketball, baseball and kabaddi. By signing in to our multi sports gaming app for the very first time, you can gain Rs. 50 and schedule your first match for absolutely free.

You too can be a part of this ac-crescent family by downloading our app and promoting it to acquire Referral Bonus at each mention.

Through the mobile app, we also run contests that will help you win amazing prizes daily. BalleBaazi introduced a special feature for progression of gamers called “Player Intelligence”. It facilitates the formation of a perfect team and develops competitive strategies to ace the gaming rounds and clinch maximum points.

Hurry! It’s high time to download our mobile app. Utilising all your skills and understanding of the game, you can fulfill the threshold requirement of fantasy cricket point system, claim cash prizes and get listed on the leaderboard, amongst the top players.