“The bigger they are, the harder they fall” – an oft-used adage for the literature lover, and a literal truth for those who had envisaged the European Super League. The fans hated it, the pundits criticized it, the players and managers were taken aback by it and ultimately, it fell on its face. In less than 48 hours, England’s Big Six – Chelsea, Manchester City, Liverpool, Arsenal, Manchester United and Tottenham Hotspurs all pulled out from it, under pressure from all the stakeholders. It was spectacular to watch, but it is now time to examine the wreckage to see if the ashes are still fuming or not.

Football has always been a game of the masses, but efforts to corporatize it began in the 1990s. Visionary manager Arsene Wenger had warned us about the idea of the Super League a long time back, while former Barca President Josep Bartomeu had spoken about the same during his resignation speech. No one paid much attention to it, until the news literally imploded a few weeks back and forced supporters to make their stance.

What is the current status of the Super League?

No, it is still not officially off.

As stated before, the Super League was an utter trainwreck – but in reality, it is still in the works. According to Florentino Perez, the president of Real Madrid, whose brainchild the league was, it has merely been delayed while they rework the structure. There is, however, little or no doubt that Perez’s initial vision has been blocked – in a way that he probably could never foresee.

What were the main issues with the Super League?

And there were many.

In an effort to make football more fast-paced and addictive, Perez and his cohort aimed to launch a competition that would see only the biggest clubs in Europe face each other regularly. Financed by JP Morgan, the sums involved in the league were astronomical which would in essence, make the game out of reach from the hands of the regular fan. It was this particular sentiment that sparked the wide outrage, along with the lack of communication and the shocking volume of greed involved in making a product of this scale.

What did the Super League fiasco show us?

A new side to the overlords of the game.
Make no mistake that while the Super League was an abhorrent idea to begin with, the manner in which it was conceived, announced and almost executed speaks volumes about the manner in how these premier institutions are run in the 21st century. From Manchester United’s owner Joel Glazer putting a statement about the Super League on the Liverpool and Manchester City website, to John Henry’s abysmal apology video to Kopites in the aftermath of the outrage – it all underlined the absolute and incomprehensible disconnect the upper echelons of management have with the regular Joe and Jenny who consider the clubs as a part of their identity and the stadiums as their pilgrimage.

While drilling down on this specific issue, the widespread protests that have now engulfed English football provide an interesting segway. With the Super League idea binned, fans of the sport have stormed stadiums demanding answers from their owners on wider issues. Arsenal and Manchester United fans have especially taken the lead, with both fan groups demanding their current owners to sell or for the British Government to bring in legislation.

Another interesting aspect of the Super League debacle is that the current lawmakers of the game – UEFA, FIFA or the FA were caught as off-guard as the fans. In a viciously-worded statement, UEFA President Aleksander Ceferin had termed the leaders of the Super League committee as “snakes”. It is not often that the lawmakers are caught napping in a manner like this, which goes to show just how secretive the entire idea was. Boris Johnson, the UK Prime Minister had to step in and show his dissent as well, thus lending this entire debate a political hue as well.

Who were the winners of the Super League fiasco?

Not really the fans, but also the fans.
While the temporary suspension of the Super League has been widely hailed as a victory for the masses, it is important to contextualize the same. Local fans and season-ticket holders have been against the massive commercialization of football for years now, but their concerns were never really paid any attention to. That is, until the Super League happened.

Following the massive protests against the idea, fans all over have discovered new-found enthusiasm to voice their concerns. From YouTube to Instagram, from blog posts to podcasts, a lot of chatter has been about the long term well-being of the sport rather than the short term benefits.

Reports have come in of Arsenal owner Stan Kroenke looking to sell the club to Spotify’s owner and billionaire Daniel Eke, who has formed a cohort with club legends Dennis Bergkamp and Thierry Henry to propose a bid. Similary, United fans held protests and even stormed into the hallowed Old Trafford turf last weekend as the #GlazersOut movement gains rapid velocity. The incident caused such a huge upset that the Manchester United-Liverpool game had to be postponed, and there is no doubt that it will hurt the pockets of the owners and regulators.

While Gunners have pointed out the lack of ambition among the Kroenkes as the reason for their protests, United fans have the debt-leveraged buyout of the club by the Glazers as their primary concern. Over the last 16 years or so, their owners have used club resources to pay off debts and pay dividends to themselves without improving the infrastructure of the club, the stadium or prioritizing fan needs as a part of their investments. Non-violent protests were thus the final option for the fans and the debacle of the Super League pushed them into action.

Without undermining the fact that the Super League might still come into play some years down the road, there is no doubt that for the first time in decades, it is the football fans who are dominating the hegemony of the corporate structure in the game. This is phenomenal, given how fans have little or no say these days in how the clubs are run. Another winner from this debate has definitely been the UEFA, who have announced a new version of the Champions League with more teams and more games to garner more broadcasting revenue but that has escaped scrutiny because of the ongoing protests.

Who were the losers of the Super League?

The fall guys, and maybe the owners?
Given how poorly planned the Super League was, the owners fell over one another to hold someone accountable for the person. In Manchester United, for example, executive chairman Ed Woodward seems to be that person – his resignation was announced following the club’s withdrawal from the Super League in a hurried fashion.

According to reports, the large-scale conversation around the sustainability of the model in which football operates currently has also been brought into the limelight, which may cause some of the owners to sell their stakes.

Another downside for the owners, although unlikely, is if the Government of Britain decides to implement the German 50+1 model via legislation. In that way, fans will have the majority voting power with respect to any decision the clubs take which might cause a serious dent in the ambitions of the money-hungry owners.

How About Channelling Your  Passion Into Real Cash Rewards?

If not a day goes by for you following what’s up and about in the world of football, we assume you are fully invested in the sport. If we got that right, we say you pour in your love for football by indulging yourself in the most coveted fantasy football leagues of the season worldwide and cash in on your deep understanding of the sport.

Football being one of the most watched and revered sports globally, Fantasy Football secures the top position among all fantasy sports played worldwide quite naturally. On BalleBaazi, you get to explore and engage in the best football matches and leagues happening around the world. Dive in with your expertise and create your dream team of fantasy football and command them straight to the finish line. Utilize our special player intelligence reports on the app itself to make informed decisions when choosing players for your team to maximize your chances of topping the leaderboards and finish big. The higher you rank on the match leaderboards, the more cash you win from the featured guarantees. To secure yourself a winning team, do not forget to follow match predictions on the BalleBaazi blog as well as on social media and Youtube channels.

No better way to play fantasy football with friends than at the BalleBaazi app! Download and draft the best fantasy team on the app and win real cash prizes every time you score high in the league leaderboards. It’s time you make your screen time count in real time! 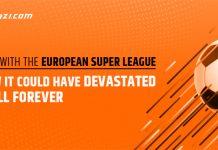