The Indian team is all set to wear orange colored jerseys in their scheduled match against England on 30th June. It would not be wrong to say that orange or saffron has long been India’s favorite color.

Virat Kohli and his team are going to sport ORANGE JERSEYS for the World Cup 2019 match against England on 30th June. The Men in Blue will do away with the attires for the game against the Englishmen that day.

The ICC announced the same in a release, “”For televised ICC events all participating teams will be required to provide for two different coloured kits, except for the host country who has preference in the choice of colour and may, if it chooses to do so, provide only one coloured kit to be worn in all matches throughout the event. In advance of the event the teams will be notified which coloured kit will be worn in each match.”

According to latest reports, it was confirmed that the Indian cricket team will be wearing the orange jersey with a blue strip on the collar. This is actually going to be the very first time that Kohli and team will be seen wearing TWO different jerseys in the World Cup following ICC’s introduction of the home and away jerseys concept for World Cup 2019.

Along with this, South Africa also modified the color of their t-shirts from green to yellow for their 2nd 2019 World Cup match against Bangladesh. Bangladesh had previously revealed an away kit with red color which led to a whole lot of online comparisons with the Spiderman costume.

Afghanistan, on the other hand, is expected to wear alternate jersey on Saturday’s match where the team is likely to change its kits as both the countries have blue jerseys. They’ve already announced its away kit i.e. red in color with a dash of blue on their team’s shirts.

So far, India has won against South Africa, Australia and Pakistan whereas the match against New Zealand couldn’t happen due to rain. The Indian team is scheduled to play against Afghanistan on 22nd June, West Indies on 27th June before going against England. 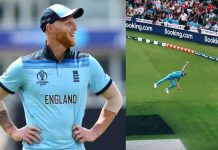