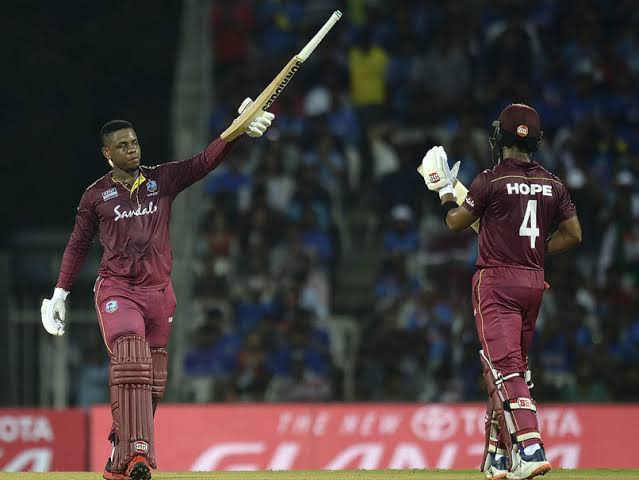 Another evening in Indian Cricket and the Men in Blue were all set to go all guns blazing against the West Indies. Chennai roared in joy when Pollard asked King Kohli’s men to bat first. Fantasy Cricket players around the country started editing their teams followed by the toss. The stage was set for a huge target to be set for the Windies thanks to some firepower in the Indian Batting line up.

But things didn’t turn out as expected for the Indians. After losing the T20 start KL Rahul early, India struggled with Kohli getting out after an inside edged rolled on to the stumps. Rohit made a decent start but wasn’t able to convert as he hooked a dolly to short mid wicket and got dismissed at 36 by his young MI teammate Alzarri Joseph.

After some Shreyas-Pant heroics and Kedar Jadhav’s cameo in the end India posted a competitive total of 288 in their quota of 50 overs. Pant finally fired and made his first ODI fifty and made a decent 71.

West Indies played some exceptional cricket after Shai Hope anchored the innings with his classy drives and orthodox old fashioned cuts and leg glances. Sunil Ambris got plumbed in front by a Deepak Chahar slower one and was dismissed after hitting two very confident boundaries. In came, the man who’s been having a dream run against India in India: Yes, the swashbuckling back foot left-handed demolisher: Shimron Hetmyer.

Hetmyer is proving to be the new Marlon Samuels who has had absolutely unbelievable records against India. Hetmyer came in to bat at the team score of 11/1. At first, he took the fast bowlers on charge and started off with some drives until and unless he changed gears on Kuldeep Yadav & Ravindra Jadeja. Hetmyer hit a 102m six right on top of the stadium roof for the ball to never come back. After he broke free, he started hitting Shami, Chahar, Shivam Dube and not to forget Kuldeep Yadav on the back foot for his trademark pulls and lofted shots.

Hetmyer completed his 2nd ODI century against India as he amassed 139 off just 106 deliveries. For a player with just 8.5 credits on the BalleBaazi app, he proved to be the value pick between India v/s West Indies ODI match. If Shimron Hetmyer was your captain on the BalleBaazi fantasy cricket app he would have got you 192 points. I mean, wow! The winner of our Mega League with username: elkrmpa6f11 went on to score 504 fantasy points win real money worth Rs 1,00,000 in cash playing online fantasy cricket. You too, can join one of the best fantasy cricket apps BalleBaazi and win real money online by creating your own teams this India v/s West Indies series.

While Hetmyer takes off, you too can take off and win yourself real money by using your cricket knowledge and play fantasy sports on BalleBaazi. After Hetmyer’s heroics, Nicholas Pooran and Shai Hope(who also scored a century) finished the game quite comfortably resulting in an 8 wicket victory for the Caribbeans.

Shimron Hetmyer has been a hit in this tour right after his announcement of release from RCB got finalized. Guess he’s trying to prove a point now because his T20 form has been exceptional. However, if you look at his IPL stats, you cannot really blame the RCB’s call:

His record against India has been unbelievable though:

The decider of the recently concluded T20I series also happened to be on the same day as Virat Kohli’s marriage anniversary; and we all saw what Kohli can do for his special one. After Kohli’s carnage, Harsha Bhogle asked, “Anyone know if there is something Virat Kohli can’t do on a cricket ground?”, which led to Twitteratis having a field day (refer to the screenshot below). 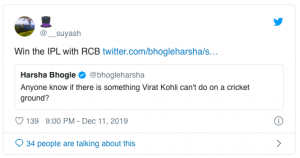 Was it a bad idea to release Shemron Hetmyer? What are your thoughts? Will it be a wise decision to bid for him again considering other teams would also look to bag the explosive West Indian batsman? Well, it remains to be seen at the IPL Auction but it’s surely going to be a handsome payday for Shemron Hetmyer, again. Let us know your thoughts in the comments section below; and don’t forget to make your fantasy team for the remainder of the India vs West Indies series. Win real-cash in real-time only on India’s most trusted fantasy sports platform, BalleBaazi.