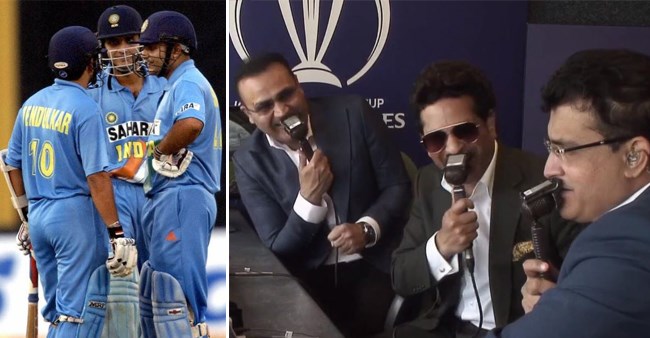 In the early 2000s, cricket saw one of the strongest Indian sides ever, led by the fierce Sourav Ganguly. And the 2 other players forming the backbone of Indian cricket were Sachin Tendulkar and Virender Sehwag.
It was a golden moment for all cricket enthusiasts as the ‘dream team’ – Sachin Tendulkar, Sourav Ganguly and Virender Sehwag were reunited once again during the opening match of the ICC World Cup 2019 between England and South Africa, however this time the reunion place was that of a commentary box!
The trio were seen commentating together during England and South Africa’s World Cup opener and it definitely took us back to the time when India was marked as a dictating force in the world of cricket.
Although this isn’t the first time Ganguly and Sehwag have been spotted with a mike. Tendulkar however, debuted in the commentary box on Thursday i.e. 30th May.
When he was asked about his first-time commentary during the World Cup opener, Tendulkar compared it with his international debut at the age of 16 in 1989. He quoted, “I know, I am having the same feeling I had in Pakistan in 1989. Now it’s 2019, I am having the same feeling. 30 years down the line. I have a microphone in hand, not a cricket bat. Looking forward to it!”
During his commentary session, Tendulkar also shared some tips for Afghanistan’s star spinner rashid Khan and told him to ‘set attacking fields’ and treat the 50-over game like a Test match. He said, “I think Rashid’s going to be instrumental in creating those upsets in this tournament. If I have to tell him something, I would say, ‘Look, treat this like a Test match. Because even in the T20 format, you’ve been able to pick wickets because the batters have not read what you’ve done with your wrist. And you do that, back yourself, have an attacking field, and challenge batters to hit over mid-on and mid-off.”
Sehwag shared two pictures on his Twitter feed, captioning it “Together Again!”
The legendary trio formed the core team that reached the finals of 2003 World Cup, only to lose to Ricky Ponting. Tendulkar and Sehwag were an integral part of the young Indian side that ended Australia’s pursuit for a fourth successive World Cup triumph in the quarter-final and eventually went on to grab only their second world title at home.
Previously, Ganguly and coach John Wright were seen at the commentary box during India’s warm-up match against Bangladesh in Cardiff.
Team India is soon to begin their World Cup campaign against South Africa on 5th June at The Rose Bowl in Southampton. Let’s hope that with the blessings of this dream team, Virat Kohli successfully repeats what MS Dhoni achieved in 2011