﻿﻿ Top 5 Fantasy Picks of All Times- If Only They Played!
Menu 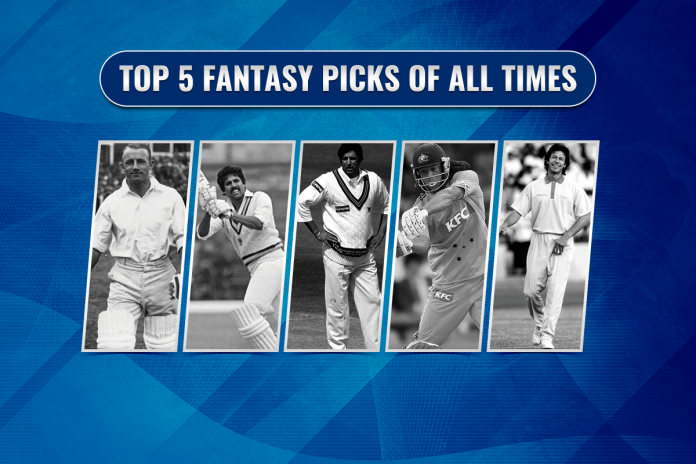 Since time immemorial, cricket has been a social adhesive in India and abroad. Cricket is one of the few positive outcomes of the British Raj in the world. Since then, the players and the sport is revered by many globally. This phenomenon called cricket is in existence due to extraordinary players, adding iconic incidents in the history of the game!

The history holds many players who could be a flawless fantasy cricket pick because of their hold in all the aspects of the game- batting, bowling, and fielding.

Following is a list of five players who could be great fantasy picks of all times:

His story opens with a young boy with a stump, a golf ball, and a tank stand. He would toss the ball towards the tank stand and then hit it with a bat, this inculcated quick reflexes in the player along with a typical bottom-handed driving technique.

Another outstanding record was hitting 334 runs in a test match (1930), which is still remembered by many. He is a treasured gem gifted by Australia to the cricket world!

It would be criminal to skip Kapil Dev’s name from this list because he is revered as the greatest all-rounder of all times. India managed to win the World Cup in 1983 under his captaincy for the first time!

Talking about his presence at the field, he is known for his athletic fielding and deadly outswingers. He was a bold lower-middle order batsman.

Furthermore, under the test format, he has taken down a staggering 434 wickets and more than 5000 runs in his 16-year long career.

India’s sister country, Pakistan has also introduced cricket gems from the country. Born to a Punjabi Arain family in Lahore, Wasim Akram was not a part of competitive cricket in his early days. This news comes as a surprise as he was later coined as ‘the king of swing’!

It was clear that he entered the field to begin his reign when he took fifer (five wickets) in both innings on his test debut!

He has played a crucial role for his country many times such as during the 1992 World Cup. During 2003 World Cup, he became the first bowler to record 500 wickets in the ODI format. He was also an active participant in England’s domestic circuit, representing Hampshire and Lancashire.

Being born to a West Indian and a European parent, Symonds chose to represent Australia as his adopted parents took him there. His player characteristics were quite distinct from many. He was powerfully agile and athletic on the field, aggressive and pretty dangerous with the bat. He was a whole package, Australia was looking for at that time! He once shot 16 sixes to make 254 runs in 1995!

After a long rollercoaster ride of a cricket journey, Symonds place in the team became debatable for the 2003 World Cup. However, Ricky Ponting, the then skipper of the team saw potential in him and had him onboard! It was truly a pleasant surprise when he delivered for his captain!

Born to a wealthy family of Lahore, he spent his early days at the Royal Grammar School of Worcester. This phase of his life made him consider taking up cricket as a profession.

Two years into his cricket career, representing Pakistan, he became the 3 rd fastest bowler at the time! His suave gallop to the crease agitated the batsmen to the core. He made reverse and counter swing his own!

The icing on the cake is that apart from his phenomenal bowling skills, he played the new ball exceedingly well and played solid defense being a tail-ender!

If these players were still mesmerizing the audience at the cricket stadiums, they would undoubtedly be an easy fantasy cricket pick for each one of us. Their determination, their glamorous leaps, and their whizzing sixes and fours will always be remembered!