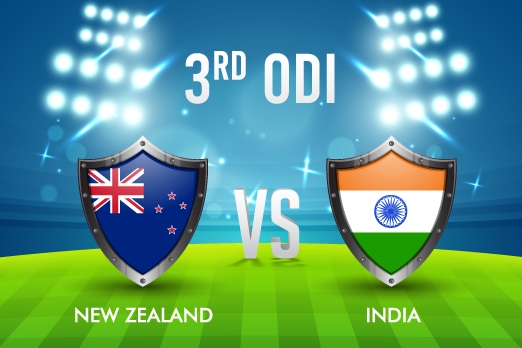 After their T20I humiliation, the Kiwis have come back strongly and already aced the ODI series 2-0. India, on the other hand are struggling to find a way of finishing the game in a win. Virat Kohli, in an interview has claimed that the series does not have much relevance with the T20 world cup coming up this year. He believes that now is the time when he can try in maximum options and that they got ‘nothing to lose!’

The match is all set to take place at the Bay Oval in Mount Maunganui. The pitch at the Bay Oval is expected to be similar to the one used in the 5th T20I. Team winning the toss would prefer batting first considering the pitch slows down during the 2nd innings and it’s not easy to hit the big shots while chasing.

According to the latest updates, Kane Williamson has been declared fit to play in the 3rd ODI and most probably either Tom Blundell or Mark Chapman will make way for the Kiwi skipper to take the proceedings furthermore. India is expected to play Manish Pandey and give either Prithvi Shaw or Mayank Aggarwal a break in the last ODI. In such a scenario, KL Rahul would be the most likely option to take up the role of the opener where he feels most comfortable.

The Indian top order has been struggling to put runs on the board and apart from Iyer, no other batsman has looked in a consistent solid touch to take the team to a par score. Captain Kohli, on the other hand has been struggling as well failing to convert his 50s into big scores like he usually does. Hopes rely on Prithvi Shaw to make his presence felt as an opener and take the attack to the Blackcaps. India need to win this one to avoid a whitewash against New Zealand following their winning streak in the T20Is.

All the fantasy cricket lovers will be going all guns blazing as India take on New Zealand for the final ODI picking their fantasy playing 11 on one of the best fantasy sports app, BalleBaazi. Here we are with our BalleBaazi playing 11 for the 3rd and final India vs New Zealand ODI:

We are going with Kane Williamson as our Captain who will be looking to make it big on his comeback to the ODI squad and Manish Pandey as vice Captain as the Indian batsman will get ample amount of time to get his eye in if he comes at the top of the order. Keep an eye for the line-ups because Pandey’s inclusion can be confirmed only after that. If he’s not in the 11, you can go Shreyas Iyer as your VC because he has been in sublime touch on this tour.

We are backing India to win this one with Pandey making a good run at the end of the innings and Saini shining with ball. Even after Williamson’s heroics, New Zealand might just lose this one. May the best team win!

While India finds revenge, you continue your fantasy cricket journey with amazing offers and BalleBaazi codes coming your way as India travels to New Zealand for a long tour of T20Is, ODIs & Tests. Use code START100 if you are depositing for the first time to get a 100% bonus on your money. Follow the fantasy tips and tricks for the 3rd ODI in the India vs New Zealand contest and make sure you play fantasy cricket and win real cash online on one of the best fantasy sports apps in India, BalleBaazi.com