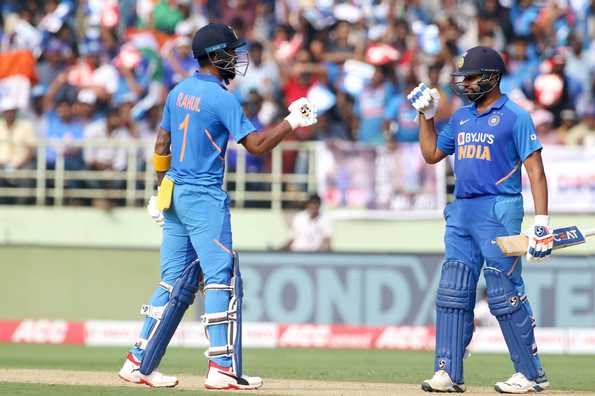 Vizag was left electrified after Indian openers Rahul & Rohit Sharma in particular redefined the meaning of ‘great starts’ putting 227 on the board for the 1st wicket in the India v/s West Indies 2nd ODI. A rare failure from Kohli who got dismissed for a golden duck did not stop India to put a mammoth total of 387 thanks to some extraordinary hitting from Pant (39) & Shreyas Iyer (53). In the end it was India that prevailed with a victory of 107 runs as the Windies were bowled out for only 280 in 43.3 overs.

BalleBaazi: one of the best fantasy sports app in India was continuously tweeting during the live stream and some hilarious tweets were retweeted. Follow us on twitter: @BalleBaazi so that you do not miss any updates from the world of fantasy cricket.

The India v/s West Indies is now evenly levelled at 1-1 and the decider will now be played at the Barabati Stadium in Cuttack. A humongous capacity crowd of 45,000 cricket crazy fans is expected at the venue where India & West Indies will battle it out for the decider.

The Cuttack venue has seen some breathtaking performance from the Indian team be it Sachin’s string of centuries or our very own Baazigar Yuvraj Singh’s highest score against England in ODIs (150). An interesting trivia of the ground is that India has scored the highest score at this venue (381-6) while West Indies have scored the lowest total on this ground (113) against the Australians. Average score batting first on this ground is 246 and the pitch is expected to be batting friendly. Batting first teams have won 8 matches while teams batting second have won on 10 occasions.

Deepak Chahar has been ruled out of the 3rd India v/s West Indies One Day International followed by a back injury has Navdeep Saini is all set to replace him in the decider on Saturday.

While India will like to put the same winning combination apart from the above change, West Indies would like to give a chance to Romario Shepherd and put Alzarri Joseph/Roston Chase to rest based on their poor run in the previous match.

For your BalleBaazi 11 to play fantasy cricket and win real cash online you can choose the following 11 players for the final ODI:

Virat Kohli would be fired up after his rare failure in the last ODI and would be raring to go after the likes of Pollard & Cottrell. Our Captain will be Kohli for this match and Shai Hope who has been in great touch looks like a good choice for Vice Captain.

Team winning the toss would like to chase so we are looking ahead at a good run chase towards a competitive target. Some big hitting and some exquisite deliveries coupled with hopefully no more butter fingers from the Indians.

Have you made your fantasy cricket team? Play India v/s West Indies fantasy cricket now on BalleBaazi and join the Gadget league to win an all-new smartphone and gadgets.

Loved the Blog? Let us know in the comments below. Also, don’t forget to Download the BalleBaazi App now for the Most Amazing Fantasy Sports Experience. Lots of Winnings & Offers for you to Cash In on!,