The European Super League was ill-conceived, poorly planned, and there is little surprise that it failed. Unless you have been living under a rock for the last few days, the news of the European Super League must have been flashed all over screens. The world of football has gone through a tide of emotions, as the European Super League in its small span of existence turned the news cycle upside down. Led by Florentino Perez, the president of Real Madrid, the consortium suffered an untimely demise due to large-scale protests all across Europe from football fans and objections from UEFA, FIFA and even Boris Johnson, the Prime Minister of Britain.

So What Exactly is the European Super League?

In essence, the Super League would be a closed league featuring 12 of Europe’s biggest football clubs. These clubs included Manchester United, Manchester City, Chelsea, Liverpool, Tottenham Hotspurs, Arsenal from England; Real Madrid, Barcelona and Atletico Madrid from Spain and Inter Milan, AC Milan and Juventus from Italy. Having won a total of 39 UEFA Champions League trophies in between them, these mega clubs aimed to replace the Champions League with the Super League.

The idea was to recognize this dozen as the founding members of the league, finalize the participation of eight more teams and create a closed league, one that would never see these twelve clubs relegated no matter what their performance season would have been for the season. Apart from this competition, as per the initial statement, the clubs would continue to participate in their domestic leagues every weekend while the Super League would be held mid-week.

How was the idea of the Super League formalized?

Way back in 2009, Perez, whom we have mentioned before stumbled upon this idea of creating a league that would see the superpowers of the game play each other more frequently than they do now. The reasoning behind this was best explained by Arsene Wenger, former manager of Arsenal FC, when he said that these clubs were desperate to find more revenue sources as they were bound to exhaust all their existing streams due to over-commercialization of their existing assets.

As per reports, Perez and his band of ultra-rich investors, who all run their own football clubs, had started preparing the outline of the Super League from 2016 itself. This band included Ed Woodward and Joel Glazer of Manchester United, Stan Kroenke of Arsenal, Andre Agnelli of Juventus and John Henry of Liverpool. These honchos and their executives got together on multiple occasions to lay the guidelines of the now-revoked European Super League, without consulting any other stakeholders, pundits, media, FIFA/UEFA or the fans.

How Did the Entire Charade Unfold?

Reports of the launch of the Super League were making the rounds on the 18th of April. However, no one took it seriously as such information had also been leaked previously but no official announcement was ever made. That was, however, not the case this time around as the clubs released a statement soon after in the evening, outlining the idea of the Super League.

It was met with swift disapproval and even outrage, as fans all over the globe took to social media to voice their dissent. Former players took part as well, with United and Liverpool legends Gary Neville and Jamie Carragher respectively launching a scathing attack on Perez and his team. The media soon joined in, outlining how the Super League is nothing but an attack on football’s meritocracy system and an effort to privatize the game further. Fans took to social media saying football would lose its charm and the ability to bring communities together, as the hash tag #SayNoToSuperLeague went viral on all forums.

In the middle of this storm, Perez took to live television to confront the naysayers. He went ahead to imply how the Super League was the next step in the evolution of the game, defending that it was necessary to introduce it to protect the clubs from heavy losses suffered due to the pandemic. In an effort to “save football”, he blamed the authorities (read FIFA, UEFA) for mismanaging the sport and even suggested reducing the duration of the games from 90 minutes to attract the younger audience who have shorter attention spans.

Needless to say, his interview did not go down well with the fans or the players, who vehemently disagreed with his views. Leeds United players wore “Earn It on the Pitch” t-shirts in their game against Liverpool on 20th of April, mocking the Super League’s commitment to never punish an underachieving team just because they have bigger brand reach. English fans launched protests outside of their stadiums as well, calling the owners out on their greed and disconnect with reality and even went ahead to ask for the intervention of the Government. Chelsea and Liverpool fans led the charge, and very soon the clubs started pulling out – Man City being the first one. Very soon, Chelsea, Arsenal, Manchester United and Spurs pulled out and the entire idea fell like a pack of cards in less than 48 hours.

What were the main objections to the Super League?

Bankrolled by JP Morgan with clubs assured of payments of over 300 million USD for just participating, there is little doubt as to why the owners pushed for it. However, it is shocking to note that they never consulted the point of view of the fans and treated this as merely an exercise to further their capitalist interests. The failure of the Super League can be ascribed to the following reasons:

No regards for meritocracy

One of the reasons for football’s overwhelming popularity, with over 4 billion reported fans of the game, is its focus on rewarding the right effort. There is romance in the game, be it Leicester City’s iconic Premier League win, to Deportiva La Coruna’s Champions League semi-final run, or Porto’s victory in the European Cup. There are stories, myths and even legends associated with these tales, and that is what makes the sport so attractive. The Super League aimed to take that all away in one fell swoop by awarding guarantees to the top dogs, which is against the culture of the game. Clubs at the lower end of the pyramid would be hit worst in such a system, with lack of revenues almost certain to make them shut shop.

As the story transpired, it was revealed that not just the fans, even the footballers and the managers were not informed about the Super League beforehand. The likes of Ander Herrera and Jordan Henderson became the voice of the offended, as more players and managers followed suit. Both Jurgen Klopp and Pep Guardiola criticized the league, while legendary defender and current AC Milan’s Director Paolo Maldini went on record to say he heard the news of the Super League from his press officer.

In the end, it should suffice to say that the Super League was ill-conceived, poorly planned, and there is little surprise that it failed. Its long-term damage in football would have been immense, and it is a huge credit to the masses who mobilized in the manner they did. Perez and his men have opened a long discussion about the health of football in general, and it is certain that the furore might lead to more sustainable changes in the sport. And boy, do we need it!

Put Your Fantasy Football Skills to Test and Let the Rewards Come to You on BalleBaazi!

Let’s rub our lucky coin until it shimmers all our hopes and dreams into reality. Start playing against your friends or against everyone to win Real Cash online using your exceptional sporting skills. Play the best ever football fantasy leagues of this season and do not miss out on putting forth your judgments into real time tests only to reap in rewards from the biggest prize pools! With BalleBaazi’s top of the line features like Player Intelligence and the option to create multiple teams of the same fantasy league at once, you double your chances to win maximum cash in every single match!

Download the BalleBaazi app now. Sign up with a brand new account to avail straight up 500 real cash bonus only to play your first ever fantasy league on BalleBaazi for FREE! 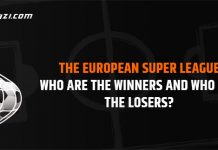 The European Super League : Who Are the Winners and Who Are The Losers?