﻿﻿ India vs Australia Down Under: Reliving The High Voltage Drama
Menu

November 27, 2020, is surely going to end all your woes of this year if they are already not going after the Indian T20 season. It’s that time of the year again when mighty India will take over the World Test Championship table-toppers Australia down under. Over the years, the battle of India vs Australia has always been filled with high voltage drama especially equipped with a lot of controversies and stump mic conversations. India is all set to begin their campaign with the ODI series beginning from the 27th of November followed by T20Is and the legendary Border-Gavaskar Test Series.

From the Ganguly’s to the Kumble’s, Dhoni’s, and now Kohli’s, the tour down under has produced memories, controversies, and eventually some quality cricket and memories that would last a lifetime.

Let’s take a Look Back at the Most Memorable moments from India vs Australia Tours Down Under:

India was touring the farewell series of Steve Waugh and began their campaign in Brisbane. After Justin Langer’s dominating century it was Zak who brought us back into the game picking up a fifer. Australia went on to make 323 in their first innings. After getting a modest start from Viru & Akash Chopra it was Sourav Ganguly, the then Captain who took charge and showed Australia why he was the ‘God of the offside’. The southpaw hit a brilliant century which till date is told to be one of the best test innings of the era and along with Laxman (75), he brought the roof down with a brilliant 144. India went on to successfully draw the test match. 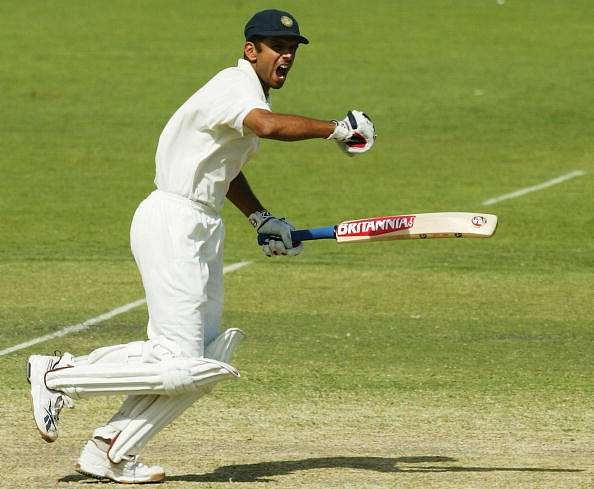 After having been dismissed for just 1 in the first innings of the 1st test Test match, Rahul Sharad Dravid never looked back in that tour. In Adelaide came his moment where he scored the best test innings of the decade of 2000-2009 smashing the likes of Gillespie, Lee & McGrath to all sides of the park reaching his double century. Dravid made 233 & 72* in the second innings that sealed the test match for India as they were victorious for the first time in a test match after 22 years. Dravid, his winning square cut to Simon Katich, and his celebration will always be etched in every cricket fan’s memory.

Playing second fiddle all this while was a batsman who had always been a nightmare for the Kangaroos: VVS Laxman. After the innings of 281 in Eden Gardens 2001, Australia never recovered from the Laxman factor. In the 2003-04 tour Laxman kept the Aussies guessing whether it was the test matches or the ODIs, he smashed hundreds in all formats in the tour. Numbers like 75,143 in test matches and then 103*, 106* in the ODIs made sure his wrists were doing the talking. For the very first time, the most dominating team on the planet had no answers to a crafty Indian middle-order batsman. 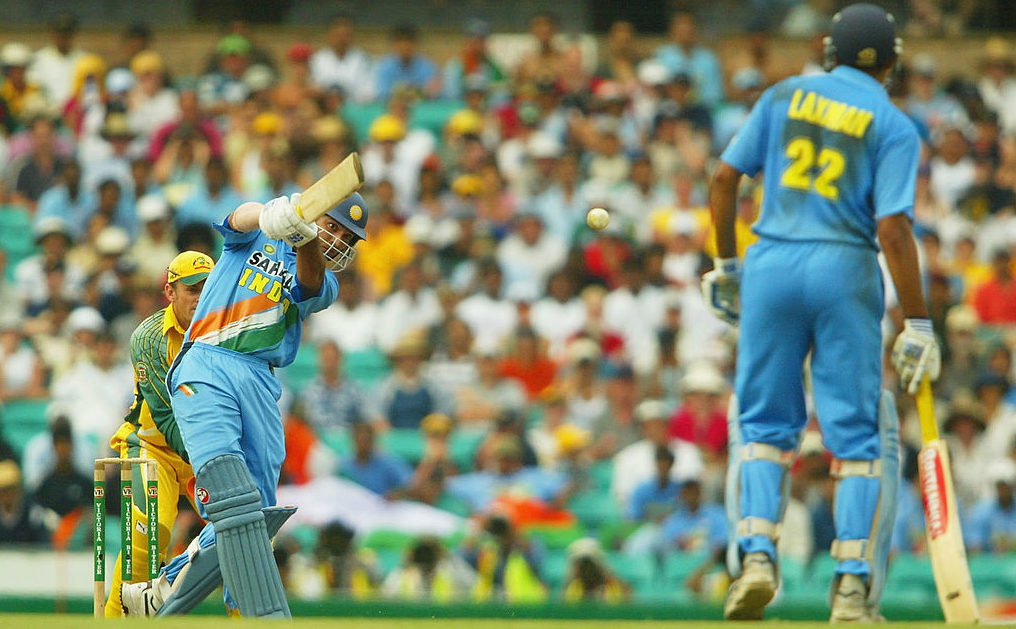 Our very own Baazigar, in his boyish charm, played out of his skins and made the Australian crowd go gaga over his clean hitting leg glances. Swashbuckling shots, flamboyant cover drives, and those eyes getting lit up when the spinners were on; Yuvraj Singh(139) owned the Sydney show and along with VVS got a 200-run stand do the talking. The rain-affected game saw a revised target from 297 down to 225 in 34 overs. Gilchrist(95) & Ponting(42) upped the run-rate and made sure they cruise to the target. But the drama seemed to toil up as young Irfan Pathan & Ganguly picked 3 wickets each along with a run out of Harvey & Michael Bevan’s dismissal. 11 needed off the last 6 but Laxmipathy Balaji gave a little room good enough for Brett Lee to smash him over mid-off for six. Australia won the game with one ball left leaving the 40,000 crowds over their feet some heartbroken while some ecstatic.

The master blaster was having a nightmare of a series with the bat scoring just one 40+ score and multiple ducks in the first 3 tests. However, he delivered in the Adelaide test as a bowler. The conversations began, “Sachin Tendulkar has been a bowler in this tournament!” A great story came to rise when Sachin had a conversation with his brother Ajit Tendulkar a night before the Sydney Test match who advised him not to play the cover drive, his favorite shot because otherwise there was nothing wrong with his technique and shot-making in the tour. Sachin went on to score 241*, his highest overseas test score at the time. God of cricket for a reason!

6. The Monkeygate Scandal: Bhajji vs Symonds 2007

When two powerhouses clash, it usually becomes a huge controversy. During the second test at Sydney under Anil Kumble’s captaincy, a similar spark got ignited between Harbhajan Singh and Andrew Symonds. Earlier that year, Symonds was racially abused by the Indian crowd with monkey chants so he was already fired up against the opposition. On the third day of the test match, Harbhajan had banter with Brett Lee who nearly got the better of him. Symonds came in and started cursing the turbanator to which Bhajji cursed him back and according to Symond’s statement: Bhajji called him a monkey. Later in his autobiography, Sachin Tendulkar who was batting at the other end cleared the air stating that the off-spinner had used north Indian slang and not racial abuse.

A total of 9 wrong decisions were made in this test match which eventually led to an Australian victory but it was a loss to the game of Cricket. The entire cricketing fraternity was deeply embarrassed after Mark Benson & Steve Bucknor’s grave decisions against the Indian cricket team. Mark Benson was even seen confirming from the Australian skipper regarding the dismissal of Sourav Ganguly even when the ball was completely grounded. Sunil Gavaskar was heard saying in commentary, “I am sorry Mr. Benson you’ve got it all wrong!” The test match is infamous for this controversy so much so that the Indian team even thought of pulling out of the tour, Australia was questioned by their own media in terms of integrity & eventually, the ICC had to intervene to help the tour continue.

After so many controversies, when the tour reached the 3rd test at Perth, India was all set to seek revenge and so they did! Rahul Dravid & Sachin Tendulkar played amazingly well at the WACA in the first innings scoring 93 & 71 after initial hiccups taking the score to 330. Australia in reply could only manage 212 after RP Singh, Pathan, Kumble & Ishant derailed their complete batting order. In the 2nd innings Australia got hammered by Sehwag, Pathan(night watchman), Laxman & MSD that made the target(413) eventually out of their reach. The match was closed by some classic Indian bowling as Australia could only manage 340. During this match only, Anil Kumble claimed his 600th test scalp in the form of Andrew Symonds.

What does calmness look like? How to be calm under pressure situations? What does supreme confidence look like? You search these terms and you might just get this video popup on your video feed. After a strong foundation laid out by Gautam Gambhir (92), India was chasing a target of 270 against Australia at the Adelaide Oval. Barring Gauti, no one really stepped up to the occasion, and then in came MS Dhoni who was playing it cool and calm saving it for the absolute last over. 13 needed off the last and Ashwin managed to give the strike to his Captain. MS hit another one which went to the fielder, denying the run it was the legendary Tony Grieg on commentary exclaiming: “How’s that for confidence!” 3rd delivery of the over and in comes to Clint McCay steaming in Dhoni rocks back smashes it with all his might and there she goes 14 rows back into probably the biggest boundary of entire Australia. 6 needed off 3 and eventually, Dhoni wins the game for the team with a ball to spare.

From stump mic conversations to classic pace bowling and some unbelievable overseas batting from some of the youngest players of the Indian contingent, this series was remembered as India’s complete domination over Australia for the very first time in a zillion years. Not only was he a rockstar behind the mic sledging ‘Temporary Captain’ Tim Paine but Rishabh Pant scored 159 in just 135 balls at the WACA. Virat Kohli already has 7 centuries against the Aussies and he did not spare them in this tour with his bat doing the talking celebration. About Cheteshwar Pujara? Well, as they say, he just batted, and batted and batted and then batted some more cruising to 3 centuries in the process.


Play in the fantasy sports arena with BalleBaazi and you can stand a chance to win prizes worth crores in real cash this fantasy cricket season. Stay home, play at home, and keep. BalleBaazi-ing. Do not forget to check out fantasy tips and tricks on the BalleBaazi blog.